In this video we introduce a novel JEB 3.0 feature: auto-signing mode for native code.

In a nutshell, when this mode is activated all modifications made by users to native code in JEB (renaming a routine, adding a comment, etc) are “signed”.

The newly created signatures can then be loaded against another executable, and all the information of the original analysis will be imported if the same code is recognized. Therefore, the user only needs to analyze each routine once.

Without further ado, here is the video, which begins by introducing native signatures before showcasing auto-signing:

As usual, feel free to reach out to us (email, Twitter, Slack) if you have questions or suggestions.

Update (Nov 29): the plugin was open-sourced on our GitHub repository. JEB 3.0.7+ is required to load and run it.

Java applications can call native methods stored in dynamic libraries via the Java Native Interface (JNI) framework. Android apps can do the same: developers can use the NDK to write their own .so library to use and distribute.

In this post, we briefly present how the binding mechanisms work, allowing a piece of bytecode to invoke native code routines.

The easiest way to call native method is as such:

The corresponding Dalvik bytecode is:

and here are the the corresponding ARM instructions:

JEB automatically binds those methods together, to allow easy debugging from bytecode to native code.

However, there is another way to bind native code to Java.

One can decide to bind any function to Java without adhering to the naming convention, by using the JNIEnv->RegisterNatives method.

For example, the following line of code dynamically binds the Java method add(II)I to the native method add():

Due to its dynamic nature, statically resolving those bindings can prove difficult in practice, e.g. if names were removed or mangled, or if the code is obfuscated. Therefore, not all calls to RegisterNatives may be found and/or successfully processed.

However, JEB 3.0-beta.2 (to  be released this week) ships with an EnginesPlugin to heuristically detect – some of – these methods, and perform binding – and of course, you will also be able to debug into them. 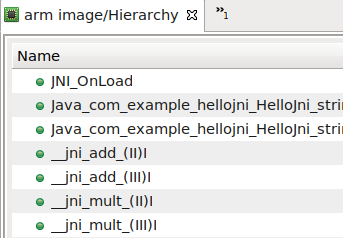 As of this writing, the plugin uses several heuristics, implemented for ARM and ARM64 (Aarch64):

Even if accurate, this method does not work when a Branch is issued via a register (BL R4) or method name is hidden.

If found, the plugin looks at cross references of this String and checks if it looks like the expected JNI structure.

These three heuristics only work when methods are defined as a static array variable. Dynamic variables would need some emulation of the JNI_OnLoad method to be resolved.

As you can see, detection is currently based on heuristics, so obfuscated methods may be missing. Feel free to tweak and improve the plugin, it is available on our GitHub repository. As usual, feel free to reach out to us (email, Twitter, Slack) if you have questions or suggestions.