Note that JEB supports DEX version 38, as well as version 39 additions. That includes API support for programmatic access to the new pools and invoke-polymorphic, invoke-custom instructions, via the IDexUnit entry point interface.

As a reminder, and quoting from the official Oracle doc (emphasis mine):

“[invokedynamic] improves implementations of compilers and runtime systems for dynamic languages on the JVM. It does this by allowing the language implementer to define custom linkage behavior. This contrasts with other JVM instructions such as invokevirtual, in which linkage behavior specific to Java classes and interfaces is hard-wired by the JVM.”

If that sounded like gibberish to you, you may want to get up to speed on dynamic invocation in Java – in particular, read the javadoc of MethodHandle and CallSite. We will (re)explain a bit in this post, but it is definitely not the main purpose of it. On top of the official Oracle doc as well as the original JSR, I recommend this article from the author of ByteBuddy.

Back in the Dalvik world

Up until DEX v35/v37, the way to invoke code in Dalvik was through one of the 5 invocation instructions:

Each one of these takes a method item, which specifies a type (class or interface) as well as a method reference – ie, the “hard-wiring” part mentioned in the above quote. Java is statically typed, and the bytecode reflects that.2 That is, until invokedynamic was introduced with Java 7.

So, what is the Dalvik equivalent of Java’s invokedynamic?

Most DEX files have version number 35. Android Nougat introduced version 37, which did not bring any structural changes (the new version code indicated support for Java 8’s default methods). If you were wondering why Dalvik did not have the equivalent of JVM’s invokedynamic, well, brace yourself: DEX version 38 is coming. 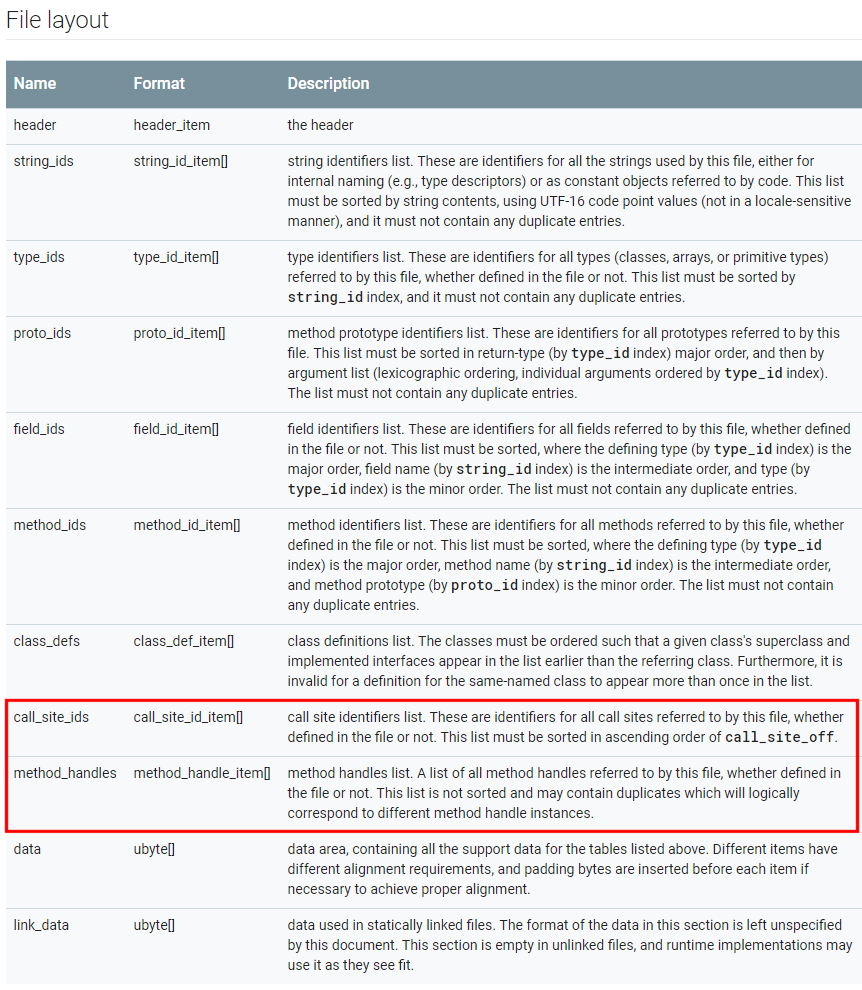 However, the header size is still 70h bytes, and therefore, contains neither the offset to, nor the count of items, for those pools. Where are they?

Let’s turn to the DEX map. Sure enough, new types were introduced: TYPE_CALL_SITE_ID_ITEM (7) and TYPE_METHOD_HANDLE_ITEM (8). We can parse the map, find those two entries, and start parsing the pools.

Below are the specifications of invoke-polymorphic taken from Android Source: 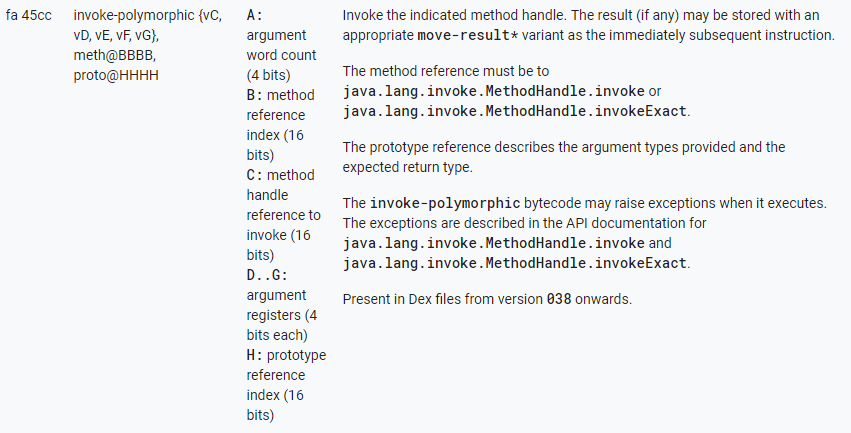 invoke-polymorphic is used to invoke a method handle using one of two @PolymorphicSignature 3 methods of the MethodHandle object: invoke() or invokeExact(). It takes at least 3 arguments:

See the example below: MethodHandle.invoke() is used on the method handle v0; the target method has the prototype (I)Object. Therefore, v1 is of type int; the return value will be of type Object.

The return type as well as parameter types are specified in the prototype item, instead of a static method item — hello, polymorphism. Of course, the target method handle must reference a method of such type, either exactly, if MethodHandle.invokeExact() is used, or have compatibility with the type (via  conversion operations), using MethodHandle.invoke().

You would be semi-right to think so. After all, we are executing invoke() or invokeExact() the old fashion way here… so, why need an additional opcode? First, remember that those methods have polymorphic signatures; their prototype is determined at compile-time. Therefore, there are two options (using the example above):

Can’t I do the same with reflection?

You may be wondering what the point of these convoluted constructions is… After all, couldn’t we do the same with reflection? The answer is mostly yes, however, remember that invokedynamic has a different goal than introspection: the goal of invokedynamic is to provide an efficient low-level primitive meant to execute dynamic call sites, and therefore, enable the implementation of dynamic languages on top of the JVM.

Practically, and as far as Java goes,  they enable the implementation of Java 8 lambdas without the use of pre-compiled anonymous inner classes.

Also practically, true polymorphism means we are no longer dealing with the auto-boxing casts associated with Reflection API calls. MethodHandle.invoke() is a very particular method – as said above, it is has a polymorphic  signature, inferred at compile-time based from the types of arguments and return value provided in the call. Nothing like actual code to show what we mean here.

The example below has a triple-purpose:

First, download Android Studio 2.3. It turns out that at the time of writing, compiling DEX v38 with a non-Jack toolchain (using AS 3.0) produces invalid DEX files.  Make sure to use the Android Gradle plugin 2.3.3 or above. Finally, make sure to use SDK level 26 in your module-level Gradle script, and add the “o-b2” option to allow the generation of the new invoke instructions (thank you, Tsuyoshi Murakami):

However, while the polymorphic MethodHandle.invoke() of execDynamically truly takes a String as first argument, an int as second argument, and returns an int; we know it is not the case with the non-polymorphic invocation used by the Method.invoke(): casts are in place to box/unbox the int primitives to/from an Integer object.

Carefully look at the disassembly of both methods:

I hope this sheds some light on invoke-polymorphic, in terms of MethodHandle uses and resulting differences in the bytecode.

Below are the specifications of invoke-custom taken from Android Source: 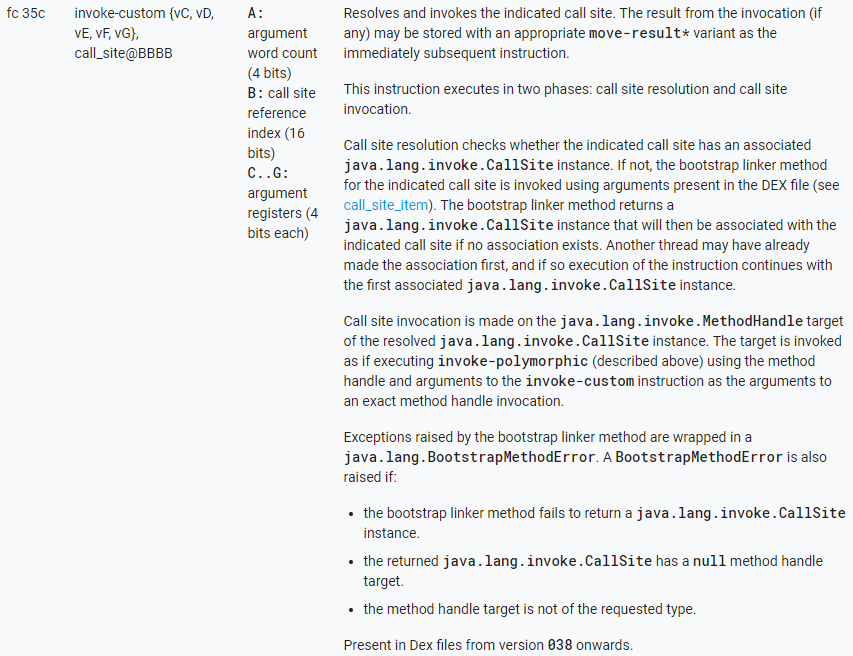 Before we explain the mechanics behind invoke-custom, remember that unlike the legacy invoke-xxx instructions, it does not take a reference to the LType;->method() that will be executed. Both will be determined at run-time.

The invoke-custom instruction first resolves and then invokes a call site:

The following diagram summarizes the bootstrap process of linking an unlinked invoke-custom: 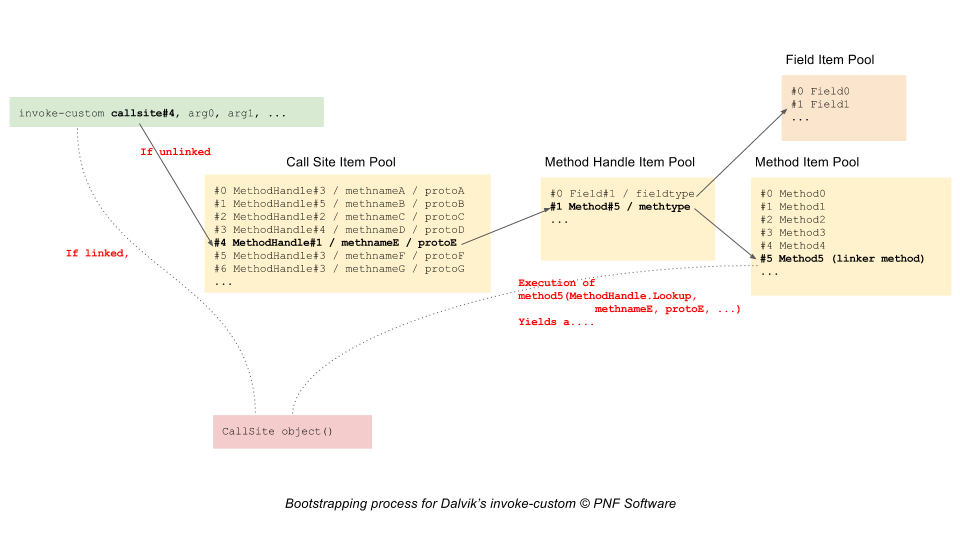 Delaying the resolution and creation of the callsite until runtime allows the VM to take the decision of which type and which method should the execution flow be dispatched to.

Bear in mind that in standard Java, crafting explicit code using dynamic invocation is currently not possible. That limitation can be circumvented with custom toolchains (such as Android’s Jack, as we’ll see below). However, a prime candidate for implicit use of dynamic invocations are of course lambdas. Lambda functions have been supported since Android Nougat and are currently compiled using virtual invocations. It is safe to say that we should see lambdas using invoke-custom in the near future, maybe as early as the release candidate of Android O.

Using the second approach, we can generate code that contains correct call site item pools. However, at the moment, those DEX files do not pass the Verifier.

That being said, the generated bytecode looks fine. Have a look at the sample below:

Using the CalledByInvokeCustom annotation, we can specify that foo() must be dynamically invoked. The code is a bit artificial, and the linked method trivial, but see how the seemingly static call to foo() in execCustom() was compiled to the following bytecode:

Note that the JEB syntax for invoke-custom call sites is temporary and subject to change. At the moment, the pool’s call site is displayed within double curly brackets:

JEB will decompile those constructs to an invocation of the bootstrap linker method, followed by a call to invoke() on the returned CallSite’s method handle. In a real environment, the bootstrap method would be executed just once. Indeed, high-level Java code cannot reflect all forms and uses of those low-level constructs.

Keep in mind that invoke-custom‘s purpose is much broader than this dummy example. As said in the previous section, we should expect it to initially be used when generating Java 8’s lambdas. They may not be extremely popular – not yet – in traditional Java programming circles, but Google’s big push on Kotlin for Android O, including:

may be indicators that invoke-custom (and invoke-polymorphic) will be used to power new language features for Android app development in the near future.

Finally, let’s conclude this post with a note on obfuscation, and generally, unintended, unplanned, or at least non-primary use cases, for MethodHandle.

Just like reflection has been heavily used by all5 Dalvik protectors and obfuscators to hide API calls and make static code flow analysis difficult, we should expect MethodHandle and CallSite to be used in similar ways.

MethodHandle objects have more restrictions than pure reflection though, eg, in terms of the scope of what can be retrieved. Obviously, they cannot be used to retrieve types dynamically — which means there is no equivalent to Reflection’s Class.forName(“…”). However, they can be used to retrieve handles on methods, constructors, and fields, and therefore could be mixed in with standard reflection-based obfuscation techniques.

As for invoke-custom: parsing and analysis of the call site items pool will be required to retrieve references to boostrap linker methods, and determine their effect on code.

So, exciting times ahead! We should all be excited to see those new dynamic invoke opcodes used by apps in the future, as well as the potential they bear in terms of new languages (or more realistically, new language features) that they can provide for Android app development.